Share All sharing options for: Stanford Women Win Capital One Cup (I Think)

As of this posting, the Capital One Cup website hasn't updated its standings to include points from the final softball coaches' poll, which was released today. Based on my calculations, Stanford has clinched the women's title and the $200,000 in scholarship money that comes with it.

The Cardinal, which lost to Alabama in the Super Regional round of the NCAA Tournament, is ranked 10th in the final poll. Based on the Capital One Cup's convoluted scoring system, which weighs some sports more heavily than others and awards points for places 1-10 in a given sport, Stanford earned an additional three points for that ranking for a final total of 121. Buoyed by a first-place finish at the Outdoor Track and Field Championships, Texas A&M finishes second with 112 points. The A&M softball team finished outside of the Top 10 in the final poll after being swept in the Super Regionals by eventual Women's College World Series Champion Arizona State, which earned 60 points for being ranked No. 1. The points were ASU's first of the year-long competition, but they were enough to bump the Sun Devils all the way into a tie for seventh place (full standings after the jump).

Here's a breakdown of how Stanford accumulated its points in the women's competition this season. Final rankings are in parentheses. For sports in Groups 1 and 2, the points have been tripled and doubled, respectively.

The men's standings are pending the results of the College World Series and the release of the final baseball coaches' poll. With four of the top 10 teams in the current standings in Omaha, it's highly unlikely that Auburn, Stanford, UConn, and Eastern Washington will remain in the top four. Baseball is a Group 1 sport in the men's competition, meaning points will be tripled. The No. 1 team will receive 60 points. The No. 10 team will receive 3.

The Capital One Cup is an unnecessary and flawed award. It's a ridiculous measure of the top men's and women's college athletics program in the country, which it purports to be. Still, the trophy will look nice next to the Cardinal's collection of Directors' Cups. 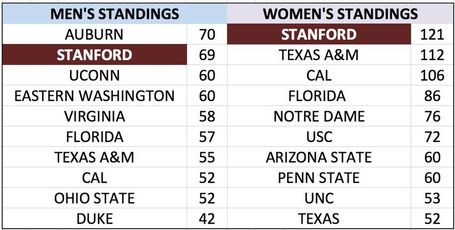