Share All sharing options for: Andrew Luck SI Feature Was a Big Hit 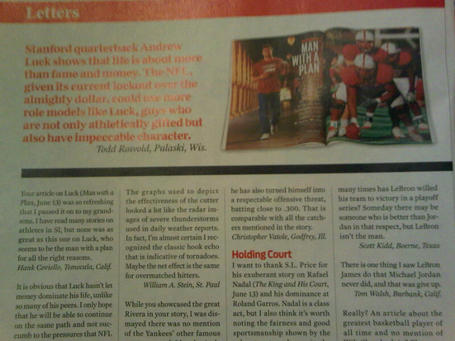 The June 13 issue of Sports Illustrated featured a nice profile of Andrew Luck. If you missed it, you can read it here. This week's issue of SI includes some letters to the editor about the piece, and, not surprisingly, the feedback is quite positive.

"Stanford quarterback Andrew Luck shows that life is about more than fame and money. The NFL, given its current lockout over the almighty dollar, could use more role models like Luck, guys who are not only athletically gifted but also have impeccable character." - Tod Rosvold, Pulaski, Wis.

"Your article on Luck was so refreshing that I passed it on to my grandsons. I have read many stories on athletes in SI, but none was as great as this one on Luck, who seems to be the man with the plan for all the right reasons." - Hank Coviello, Temecula, Calif.

"It is obvious that Luck doesn't let money dominate his life, unlike so many of his peers. I only hope that he will be able to continue on the same path and not succumb to the pressures that NFL fame can bring." - Dominic Marucci, Philadelphia