Share All sharing options for: Why Didn't Jeremy Lin Go To Stanford? 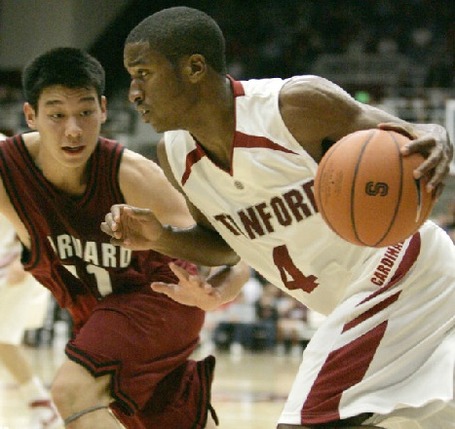 With Linsanity sweeping the nation, this video of Jeremy Lin's five quick steps to get into Harvard has been making the rounds. It's an amusing effort and worth a watch if you haven't seen it already. Toward the end of the video, Lin, with a framed poster of a dunking Latrell Sprewell hanging in the background, describes how disappointed he was when he was rejected from Stanford.

Lin was a star at Palo Alto High School and a Cardinal fan growing up. He was "dead set on going to Stanford," according to his high school head coach Peter Diepenbrock, who also told SNY.tv's Adam Zagoria that Trent Johnson misled Lin during the recruiting process. Johnson wanted Lin to walk on, and possibly earn a scholarship the following year. Diepenbrock and Lin were under the impression that Johnson had only one scholarship remaining for that year's recruiting class, and that it would go to either Landry Fields or Da'Veed Dildy. Both Fields and Dildy committed to Stanford and both were given scholarships.

Diepenbrock said Lin and his mother were so turned off by what happened, that when a Stanford assistant tried calling Lin later on to get him to walk-on, he never returned the calls.

"Come on, coach, I can’t play for somebody I can’t trust," Diepenbrock recalled Lin saying.

Dildy started a total of five games during his Stanford career. Fields, who led the Pac-10 in scoring and rebounding as a senior, told Zagoria that he had no idea Johnson was recruiting Lin. It's an interesting read and it raises a couple of questions. Would Lin have been admitted if Johnson offered him a scholarship? Or, was Lin admitted, and the rejection he refers to in the video is a reference to Stanford's not offering him a scholarship?

Lin wound up at Harvard, one of the only schools that offered him a guaranteed spot on the roster. He'd get his chance to make the Cardinal pay. Stanford hosted Harvard at Maples Pavilion to open the 2007-08 season, Johnson's final year on the Farm. Lin, a sophomore, earned the start, with family and friends wearing green "The Jeremy Lin Show" T-shirts in the crowd.

"It's tough coming home and playing relaxed," Lin said. "I've been thinking about this game for months."

It showed. Lin missed all six of his shots in fouled out in 21 minutes, as Stanford rolled to a 111-56 win. It was the second and final time time that Lin was held scoreless in his collegiate career. Johnny Dawkins sure could've used him.