Share All sharing options for: Will You Buy Stanford NIT Championship Merchandise? 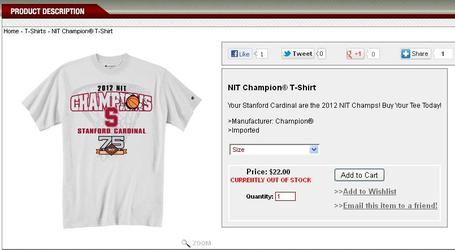 CBS Sports Stanford reporter and prolific tweeter Kyle Bonagura posed an interesting question during Tuesday's NIT semifinal win over UMass: Would you rather your team win the NIT or get blown out in a play-in game? (Hi, Cal.)

I'd take the NIT title, but only instead of losing the play-in game. I'd rather Stanford get blown out in what the NCAA would now like us to refer to as the Second Round--as the Cardinal did in 2007--than win the NIT.

I can understand why you might disagree. The experience that Stanford's underclassmen gained in their run to the title could carry over to next year, in which case the Cardinal will be better off than if they were demolished as a 12-seed in the NCAA Tournament. Still, the NIT isn't what it once was.

That brings me to my own question: Will you buy NIT Championship merchandise (which may or may not be out of stock)?

I'm very happy the Cardinal won and I'm excited for next year, but I don't plan to buy a shirt. I think it might draw jeers anywhere but Minneapolis and maybe Seattle. But hey, at least Stanford is spelled correctly.