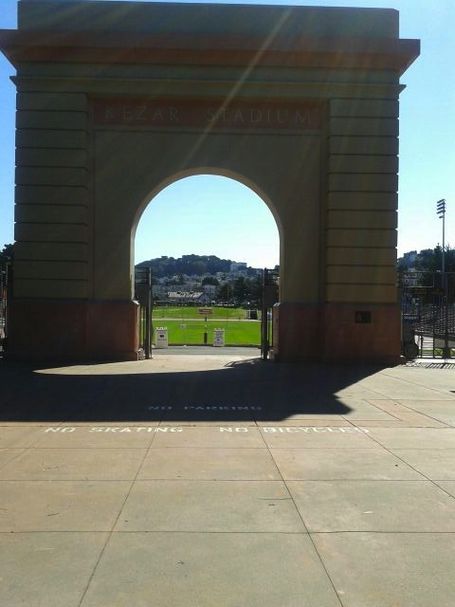 The Stanford defense looked better than the offense and the Cardinal's QB competition isn't any more clear after today's Spring Game at Kezar Stadium. Neither of those things should come as much of a surprise.

Loyal reader--and very nice guy--SacCardFan attended the game and was kind enough to provide a rundown of the action. Check out a few more photos and his full (unofficial) play-by-play with commentary after the jump. 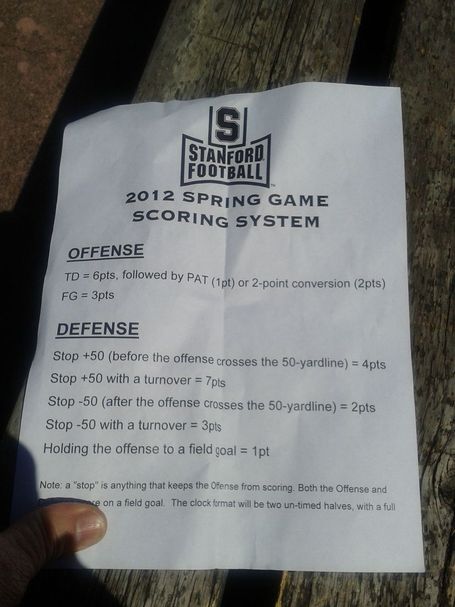 In inauspicious beginning, Nunes's pass to Ty Montgomery is dropped. Nunes completes his next pass to Terrell for 1st.

Ricky Seale stuffed for 0 on first run. Nunes scrambles for 1, 3rd and 9. Scrambles again for 5, which crosess the 50. Zychlinsky punts the ball 55 yds for touchback.

Montgomery cathches next pass for 4. Ricky Seale up the middle for 1. Nunes completes to Montgomery for 8 and 1st.

First Nottingham pass is batted down by Mauro.

Nottingham gets 3 to Meinken, rolling to left. 3rd and 7, complete to Keanu Nelson, gain of 3. 4th and 3. Complete to Davis Dudchock, who has good hands and looks tough.

Cummings up the middle for 1, Lancaster on tackle. Nottingham play-action bootlegs to left gains 5. Farthest drive of day, to 29. 6 yd pass over the middle to Dudchock to the 24, 1st down.

Complicated count, lots of motion, earns another false start penalty. 1st and 15 at the 29. Time out.

Debniak pushes around LT for first "sack." Jackson Cummings for about 8.

Nottingham fires a bullet to Keanu Nelson in tight coverage, 1st at the 1.

Kevin Hogan hits Jordan Pratt to outside for 9.

Kelsey Young bounces outside for 25 to the 29.

Young again over LG for 2.

Andrew Stutz false start, back to 32.

Long 3rd down pass knocked down by Brent Etiz.

Nunes back in. Play action to Young is dropped.

Kelsey Young on reverse for 9, tackled by Wayne Lyons.

Ricky Seale over the top for a 1st.

Seale picks his way for 4.

Montgomery separates from Reynolds, but is overthrown by Nunes ((under positioned?).

Zach Ertz over the middle, just out of reach.

Seale for 6 over LG, tackle by Vaughters.

Cummings picks his way for 8, tackled by Hemschoot.

Quick out to JRpatterson, fights for 1st.

Long pass to JRP, can't get past Brown.

Nice 19 yd pass to Keanu Nelson, who comes down with ball in heavy traffic.

Nottingham pressured, misses Cummings at the 5.

Nottingham beats blitz, completes to Jordan Pratt, who lools more like a TE, for 6.

Nottingham intercepted on a non-called pass interference to end the half, Terrence Brown beating JRP on what would have been a flag if playing USC.

Overall, the front seven looked pretty solid, and the CB group seems stronger and more present than last year. The offense reminds me of Andrew Luck's first year: lots of gimmicks - reverses, long passes, and little to no gain on power. Not the methodical 1st down after 1st down that Luck spoiled us with. Kelsey Young is as advertised: dangerous when running, but couldn't come down with 2 catchable balls. Montgomery is stronger this year, but still has to improve on separation. Pratt seems like a solid possession receiver. JRP did well running on a reverse, but is not yet a complete receiver. Dudchock is a possession TE, and should see playing time. Nottingham showed the closest to the Luck form of running the offense, but also made the most mistakes. Had the strongest arm, by a little. Nunes shows more poise, and seems like a more serious scrambling threat. Hogan was okay, but a level lower.

Kelsey Young with some nice runs for a 1st. Nottingham's pocket collapses for 1 yd loss. Trent Murphy blows over RT for 9 yd loss.

Nunes back in. Seale for 3. Nunes holds pocket, hits Terrell on PI (Vaughters). Nunes underthrows Ertz 20 yds downfield on his next pass.

Nunes goes back to Ertz, but it's broken up by Vaughters. Ertz stays down on the field for a sickening 2 minutes, but walks off.

Nunes throws a little high to Toilolo. 4th and 10. Nunes to Montgomery, who comes down with it on the sideline, but lands out of bounds. Nice grab, though.

Debniak sacks Nunes on next play, 5 yds. Quick out to Ty M gets 4. Nunes scrambles in pocket, steps up, throws high to Montgomery. Rhyne punts it 65 yds in the air, 54 yds net.

Nottingham back in. Shows poise and audibles, to off LT for 0 gain. Henry Anderson sack. Then nice 30-yd to Dudchock, great grab to the 44.

Nottingham sacked for 7 by Gardner.

Nottingham avoids the rush and completes screen to Young, but loses 3 because Tarpley is there. 3rd and 20.

Cummings gains none, gang tackled by Tarpley from behind, others in front. Cummings for 0 up the middle. Ball at 44.

Nottingham to JRP at sideline, caught out of bounds.

4th and 9, offense goes for it, JRP tangled up with Browning, can't come down with it.

Nunes back in. Hewitt leaks over middle, complete for 11, tackled by Lancaster.

Seale shows good timing, blows through tackle for 9. Seale then runs into his blocker, stopped by Vaughters, but 1st down at 42.

Nunes goes through receivers, then throws over an open Montgomery.

Finally, Nunes hits JRP for nice completion to the 4 (beats Bernard in fight for the ball).

Nice slant to Montgomery, who was wearing a CB, for the TD. Williamson booms the PAT for what could have been a 40 yd FG.

Evan Crower in at QB, Cummings over RT for 2.

Kelsey Young fights for no gain, Lancaster and 2 others on tackle.

Nunes in for next series. Misses a wide-open Toilolo on 35-yd post.

Good blocking on an out to Montgomery, who scampers for 24. Olugbode on force out. Hewitt on good block.

Ricky Seale fights for 3 against Debniak.

Nunes throws it out, Hewitt seems to have words with Richards.

Nunes on play-action bootleg outraces OL for 1st down at 31.

4th down TD pass to JRP, who wasn't really open, broken up to Browning.

There's lot of work to do. This is not the team that will beat SC, but the defense could give them more trouble than before.

A lot was sloppy (snaps, PAT), but brighter spots included Cummings as a workhorse RB, reminds of a smaller Taylor.

Kelsey Young was another bright spot, but those two dropped passes are a concern. Pratt and Dudchock are keepers, and Montgomery is playing with more confidence. Vaughters made his presence felt on defense, as did Reynolds and Richards. Trent Murphy and Chase Thomas, as well as Debniak, are showing they can't always be stopped.

The QB competition shows little clarity. The best we can hope for is that these QBs work themselves stronger and bigger and smarter over the summer, and that by September there is a hope and prayer offense that has some strengths, but some exploitable weak spots. We're going to have another year like 2009, but a better defense and better balanced offense. There will be no Toby, and there will be no Andrew Luck; but whoever is QB will be better than Pritchard. So I think 8-4 is a reasonable expectation; see you in San Diego or El Paso? 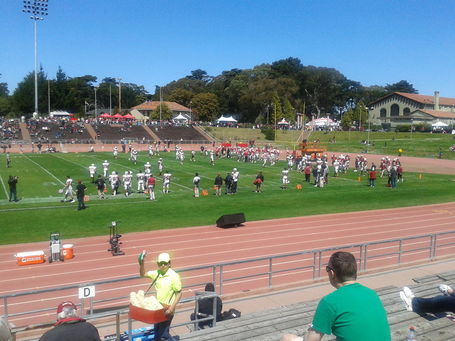