Share All sharing options for: Stanford vs. Notre Dame: Best and Worst

A look back at the best and worst from Saturday's 28-14 win over Notre Dame.

Best Display of Strength: Coby Fleener caught the first of his two touchdowns on the night around the 15-yard line and dragged Notre Dame cornerback Robert Blanton into the end zone for his ninth touchdown of the season. It was a bit like watching Magnus ver Magnusson pull a semi-truck on ESPN2 at 2 a.m., even if Blanton is only 200 pounds. The play moved Andrew Luck past John Elway for the most career passing touchdowns in Stanford history.

Worst Attire: Spotted in the Red Zone -- a student in a Kelly green Notre Dame jersey (never OK) and another student with a backwards Syracuse hat (too soon after the Cardinal's 69-63 loss to the Orange). 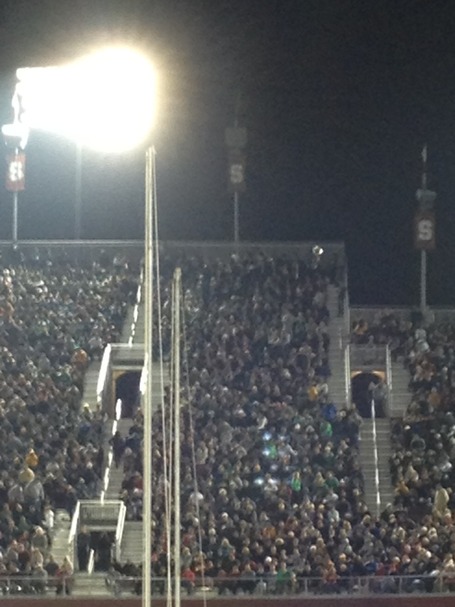 Best Place for a Band: Notre Dame's full band didn't travel, but there was a small contingent in the final two rows of the upper deck. Squint and you can make out a tuba.

Best Helmets: Stanford's Nike Pro Combat uniforms and matte black helmets got all of the attention, but Notre Dame's golden domes were a sight to behold. "They look like Christmas ornaments," my friend remarked. They looked pretty awesome from the stands. As for Stanford's duds, the players loved them, which is great. I prefer the traditional uniforms, but if it's only a once a year thing, I'm cool with it.

Worst Decision: With Stanford leading 21-7 early in the fourth quarter, Luck threw incomplete to Griff Whalen on 3rd and 6 from the Notre Dame 32. Head coach David Shaw immediately trotted out Jordan Williamson  for a 49-yard field goal attempt. Williamson was clutch against Cal last week in giving Stanford a two-score lead, but he missed this one wide left. Sorry, but when you have a quarterback who you've touted as a player who does things that nobody else in the nation does, and your defense has been lights out all night, I think you should show some confidence in your offense and go for it in that situation.

Best Explanation: The referee offered an eloquent explanation as to why Ty Montgomery's apparent fumble on the opening kickoff was overturned upon further review. Ty Hildenbrandt of the Solid Verbal noticed.

Worst Microphone Mishap: There was nothing soothing about the time the referee forgot to turn his microphone off before blowing his whistle to wind the clock. I think my ears are still ringing.

Best Play-Action: After Notre Dame punted with 8 minutes remaining in the game, Stanford ran 5 consecutive running plays. On the sixth play, a 2nd and 7 from the Cardinal 45, Luck went to his bread and butter, a play-action pass down the middle to a wide open Fleener. The touchdown gave Stanford a 28-7 lead, and, in my estimation, clinched the Heisman for Luck. The experts don't seem to think so.

Worst Garbage Time TD: The Irish went 87 yards on four plays in 43 seconds late in the game to cut the Stanford lead to 28-14. 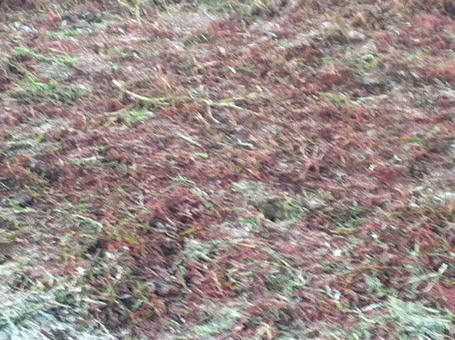 Worst Field Conditions: I got a closer look at Stanford's infamous turf after the game. Players didn't seem to be slipping quite as often as they did in the previous two games, but man, it's no wonder Stanford is considering artificial alternatives. I thought about taking a few pieces home to put up on eBay. Chunks of grass that Levine Toilolo slipped on could make great collector's items when he's catching TD passes in the NFL, even if they're not especially rare.

Best Preposterous Predictions: We were half right when we predicted that Luck would throw for at least four touchdowns and complete at least 75% of his passes. He finished 20-for-30 with 4 TDs and a pick. We also said Stanford would sack Tommy Rees at least 6 times. The Cardinal finished with five sacks, though some of those were against Andrew Hendrix.

Worst Preposterous Predictions: Michael Floyd finished with 92 yards receiving, which is a lot more than 40. The Cardinal didn't come close to winning by 25, but it probably could've if the playcalling wasn't so conservative in the second half. I wouldn't have preferred that Shaw go all Lane Kiffin on the Irish, but letting Luck air it out a little more in his final home game -- and with Heisman voters everywhere waiting to be wowed -- would've been nice. 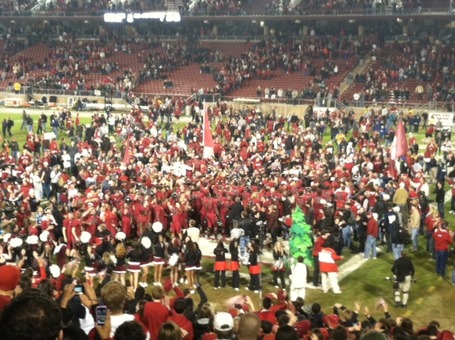 Best Result: The Cardinal is 11-1 and headed to a BCS bowl for a second consecutive season. Hail, Stanford, hail.