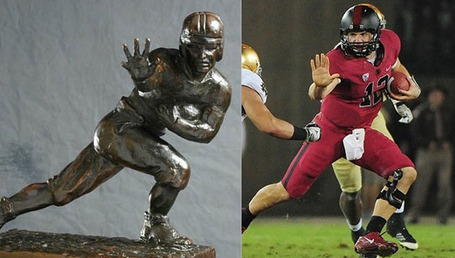 With a photo of Andrew Luck striking a Heisman-like pose against Notre Dame next to an image of the trophy projected on the screen behind him, Stanford head coach David Shaw did something that would've made Luck squirm more than the fiercest pass rush. After addressing the national media about being named Pac-12 Coach of the Year, Shaw sang the praises of his record-setting QB in a small press conference that was broadcast live on GoStanford.com.

Shaw began his Luck for Heisman stump speech by running down a list of Luck's statistical accomplishments and the various school records he owns. Shaw pointed to Luck's success in the red zone (1 turnover in the last two years) and said he's had many Heisman moments over the last two seasons. According to Shaw, Luck is the only quarterback in college football history to go undefeated (6-0) against both Notre Dame and USC.

The Stanford head coach proceeded to highlight the complexities of the plays that Luck memorizes and calls at the line of scrimmage, something that differentiates him from every player in the country. Shaw rattled off three different plays -- an amusing string of Qs, zips, kills, reds, tangos, and, bananas.

During the Q&A session that followed, Shaw continued to emphasize what he says separates Luck from the other candidates in the Heisman race. (It's not statistics.)

"Who's doing what others can't do?" Shaw asked. "...There's nobody that does what Andrew does, at any position, on any other team."

Here are a few other quotes from the press conference...

On what Luck's winning the Heisman would mean for Stanford:

"It would mean a lot. Not that it was the goal we had as an organization...It would be the recognition of what we believed since, probably, Andrew's third practice here. Which is, this guy is phenomenal."

"We have no idea (how far he can throw the ball) because he flicks it and it goes 65. I've never seen him strain to throw a ball and I've seen him throw it 70. All Andrew does is want to complete passes. He's throwing the ball 20 yards and he can do that without any effort."

On Luck's performance in Stanford's loss to Oregon:

On winning Pac-12 Coach of the Year honors:

"I was really taken aback to a certain degree. I hadn't honestly thought about it...It's a direct reflection of me having the staff that I have and the players that I have."