Stanford vs. Arizona: Best and Worst

Share All sharing options for: Stanford vs. Arizona: Best and Worst

Here's a quick look at the best and worst from Stanford's 37-10 win against Arizona.

Best Start: Arizona quarterback Nick Foles, who completed his first 17 (!) passes. The senior struggled after that, however, and finished 24-for-33 for 239 yards and a touchdown.

Best Finish: Andrew Luck, who threw a pair of second-half touchdown passes to pass Jim Plunkett and move into second place on Stanford's all-time list. Luck wasn't sharp in the first half, but he finished 20-for-31 for 325 yards passing and added 36 yards on the ground.

Best Preposterous Prediction: Stepfan Taylor was an absolute stud, carrying the ball 22 times for 153 yards, including a 49-yard gain in the first half. Stanford still had some issues in short yardage situations, but the team's robust 6.2 yards per carry should allay many of the concerns about the offensive line.

Best Recovery: Juron Criner, who had 6 catches for 48 yards and a touchdown less than 2 weeks after undergoing an appendectomy. 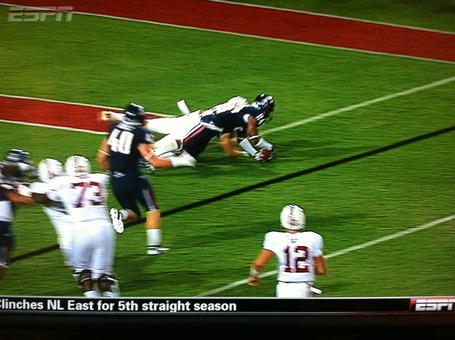 Best Overturned Call, Part I: On third and goal from the 2 with the score tied at 0 in the first quarter, Luck made an ill-advised throw. The pass, intended for Griff Whalen, was ruled an interception, but replay showed that the defender didn't have full control of the ball when it hit the ground. Jordan Williamson's 19-yard field goal gave Stanford a 3-0 lead.

Best Overturned Call, Part II: On a bizarre play in the fourth quarter, Criner caught a short pass from Foles and appeared to be tackled, but got up and raced into the end zone. The replay showed that Criner's elbow had hit the ground and the play was reversed. 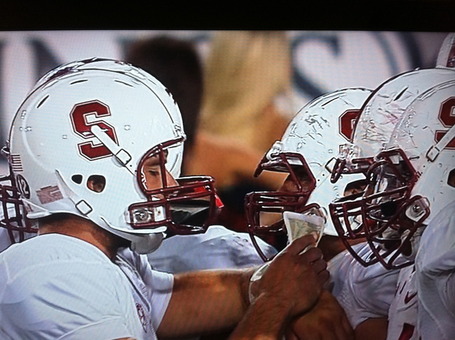 Best Helmets: The Stanford O-line's. I don't think the scratches will show up as well on the Nike Pro Combat matte black lids, which is a shame.

Best Tight End: It's got to be Levine Toilolo, who had four catches for 102 yards, including a 34-yard touchdown and a 39-yard pickup on third and 1 off a beautifully executed play-action pass. Zach Ertz had a TD reception and Coby Fleener was knocked out of the game in the first quarter after hauling in a 20-yard pass.

Worst Nightmare: Shayne Skov left the game in the second quarter after suffering an injury to his left leg. Skov, who appeared to be in a lot of pain, was helped off the field and later carted into the lockerroom. He returned to the sideline on a cart wearing street clothes in the second half.

Best Tribute: Chase Thomas, who painted a No. 11 in eyeblack on his right arm at halftime.

Best Sack by a Freshman: James Vaughters, whose playing time could increase.

Worst Penalty: An Arizona player kept a Stanford drive alive late in the third quarter when he was whistled for being offsides with the Cardinal in punt formation. I thought Mike Stoops was going to eat his visor. Stanford capitalized on the mistake, ending the drive with a touchdown to go ahead 30-10.

Best Fourth Down Call: On 4th and 1 from the Arizona 24 in the first quarter, Luck pitched the ball to Anthony Wilkerson, who broke contain on the outside and darted down the left sideline for a 24-yard touchdown. The score put Stanford ahead 10-0. 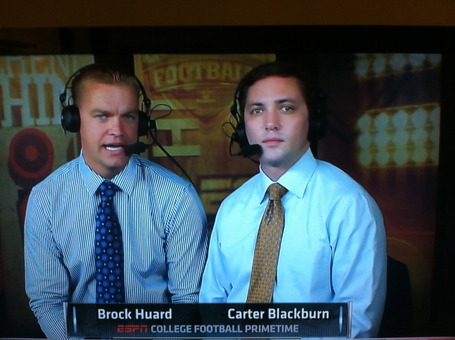 Worst Question: Did Brock Huard just ask if Stanford fans are proud of their band? Yes, yes he did. 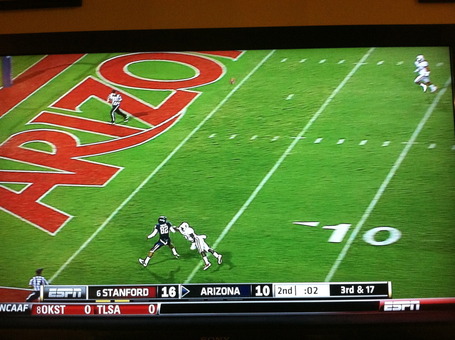 Best (and Worst) Way to End a Half: I'm not exactly sure what Johnson Bademosi was thinking letting Juron Criner run past him on 2nd and 16 from the 43 on what should have been the final play of the first half. Thankfully, he had the presence of mind to take a leaping swipe at Criner, which was just enough to prevent him from making the catch. Bademosi was flagged for the blatant pass interference, but a 15-yard penalty and an untimed down was a much better option than giving up a touchdown in that situation. Bademosi would break up another potential touchdown to Criner in the second half.

Best Kicker: Williamson, who was perfect on three attempts and absolutely drilled a 45-yarder straight down the middle.

Best Winning Streak: 11 games by Stanford, tops in the country.

Best Time for a Bye Week: Now. Get healthy, boys.