Share All sharing options for: Best and Worst: Stanford vs. Washington State

Here's a look at the best and worst from Stanford's 44-14 win at Washington State.

Worst Way to Start a Game: After winning the coin toss and electing to receive, Andrew Luck was intercepted by Damante Horton on the Cardinal's second play from scrimmage. Jamal-Rashad Patterson appeared to have a step on Horton, but the pass was underthrown.

Best Winning Streak: Stanford established a new school record with its 14th straight win dating back to last year's thrilling victory over USC. Most of Stanford's wins since then have been far less tense. In fact, the Cardinal's last nine wins have all been by at least 25 points.

Worst Deja Vu: Chris Owusu was on the receiving end of another brutal hit in the first half and did not return. Owusu missed several games last season after suffering a concussion on a similar play against Oregon. The hit didn't draw a flag. "If there is contact on our guy's head then it should be a penalty," Stanford head coach David Shaw said after the game. I didn't think it was a dirty play, but it was definitely tough to watch. Get well soon, Chris. 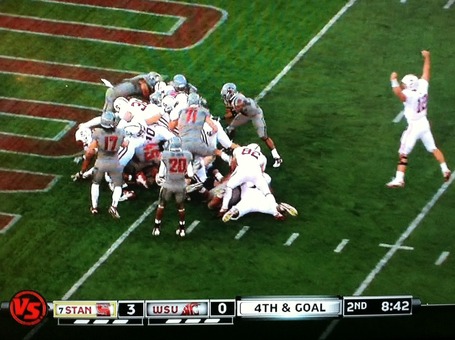 Best Touchdown Celebration: Stanford really doesn't like settling for three points after it enters the red zone, so after doing it once earlier in the game, Shaw sent in the jumbo package on fourth and goal from the 1 and let his offensive line do its thing. After Jeremy Stewart plowed into the end zone, Luck celebrated with a leap. 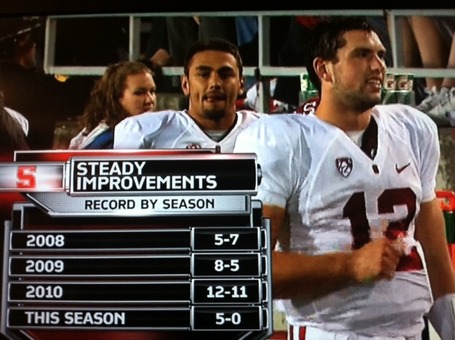 Best 7 O'Clock Shadow: This graphic would lead you to believe that Stanford played a 23-game schedule last year. ("Well, now Versus has some things to learn," my grandfather said.) It might take me 23 games to grow the amount of stubble that Luck was sporting by the end of Saturday's win. Is it a coincidence that he got better as the night wore on? There's magic in that stubble, I tell you. Please, Andrew, let it grow. In all seriousness, Luck was masterful after halftime. He finished 23-of-36 for 336 yards. All four of his touchdowns came after the break. 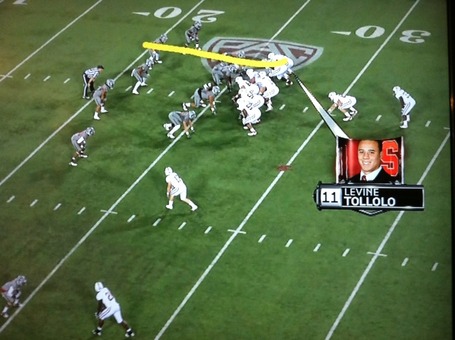 Best Unheralded RB: Stepfan Taylor reached 100 yards on only 17 carries and added three catches for 22 yards and a touchdown. The only blemish for Taylor was Stanford's first lost fumble of the season.

Worst Return: WSU quarterback Jeff Tuel, who started for the first time since suffering an injury in the first game of the season, didn't look good (17-of-30 for 145 yards and 1 TD). Marshall Lobbestael led the Cougars on their second scoring drive in garbage time.

Best or Worst Uniforms: My dad said Washington State's all-gray uniforms reminded him of old-fashioned underwear, but they were apparently the winning choice in a fan poll.

Best Defensive Stand: With Washington State trailing 10-7, Isiah Barton returned the opening kickoff of the second half to midfield. The Stanford defense forced a three-and-out, with Matt Masifilo and Chase Thomas combining for one of Stanford's six sacks on third down. On its ensuing drive, the Cardinal marched 85 yards on four plays  to extend its lead to 10 and never looked back. 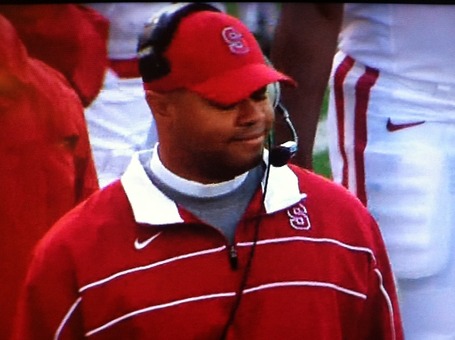 Worst Challenge: Shaw challenged a 4-yard completion on 1st and 10 from the WSU 1-yard line in the first quarter, presumably having received word that the ball had hit the ground. Replay upheld the call on the field and Stanford lost its only challenge.

Best Tight Ends: Zach Ertz, Coby Fleener, and Toilolo continue to put up eye-popping numbers. The trio combined for 11 catches for 216 yards and three touchdowns. Fleener led the way with 128 yards and a score. Griff Whalen, who had 7 catches for 76 yards, was the only Stanford wide receiver with at least one reception.

Worst Hands (After Contact): Let's hope dental school-bound Washington State wide receiver Jared Karstetter can hold onto a drill better than he could the football on Saturday. Karstetter fumbled twice and it would've been three times if a play that was originally ruled a catch and fumble hadn't been challenged and then ruled an incompletion. Props to Johnson Bademosi, who forced Karstetter's two fumbles and had a team-high five tackles.

Best Way to End a Game: Special teams was an adventure for Stanford all night, especially Ty Montgomery. The freshman recovered his own fumble on a kickoff in the second quarter, but he more than made up for what could have been a costly mistake by taking Washington State's kickoff with 14 seconds remaining in the game 96 yards to the house. By the time Montgomery reached the end zone, the clock read 0:00, but just barely. It was a sign of great things to come.