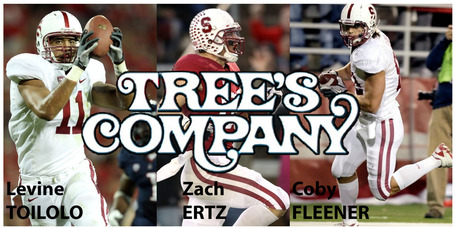 Andrew Luck does a lot of things exceptionally well, but coming up with clever nicknames apparently isn't one of them. Luck's suggested moniker for his trio of tight ends, "The Tall Trees," fell flat, so the TriumviratE has adopted Zach Ertz's nickname instead: Tree's Company.

They can block and much more, they'll be scoring on you...

Ertz, Coby Fleener, and Levine Toilolo have put up huge numbers (44 catches, 837 yards, 12 touchdowns) and drawn high praise throughout the season. Head coach David Shaw says they're the most versatile group of tight ends he's ever seen and opposing defenses can't seem to figure out how to stop them.

Fleener, the only senior in the trio, has put up the most eye-popping stats thus far. He was named the Mackey Tight End of the Week after catching four passes for 128 yards and a touchdown in the Cardinal's 44-14 win against Washington State and could threaten a couple of Stanford single-season receiving records. Fleener's 23.9 yards per catch would break Miles Moore's school mark of 21.5 set in 1971 and top Jay Novacek's NCAA record of 22.6 set in 1984. With 6 touchdowns through six games, James Lofton's school record 12 touchdown receptions in 1977 is also within reach.

Fleener has picked up where he left off last season after catching six passes for 173 yards and three touchdowns in the Orange Bowl. In the locker room after that game, former Stanford coach Jim Harbaugh yelled, "People ask why we recruit so many tight ends? That's why!"

Shaw shares Harbaugh's affinity for the tight end position and isn't concerned that the Cardinal's passing offense has relied so heavily on Tree's Company this season. Why should he be? Stanford is taking advantage of what opposing defenses are giving them. When opposing linebackers and safeties manage to lose track of three guys who are 6-foot-6 or taller, Luck makes them pay. How many times have the Cardinal's tight ends found themselves wide open on play-action? The closest defender on Toilolo's touchdown reception in the second half of the Arizona game was Ertz!

If Fleener continues at his current pace, he'll become the first Stanford player to win the John Mackey Award. His challengers through the first half of the season include the likes of Clemson's Dwayne Allen and San Jose State's Ryan Otten, both of whom were named to the award's midseason watch list (see table below). As far as I can tell, there's nothing in the award criteria that prohibits more than one player from a school being named to the watch list, but Fleener is the Cardinal's only representative. I've added Ertz and Toilolo's numbers to the end of the table. As you can see, both players are worthy of inclusion. 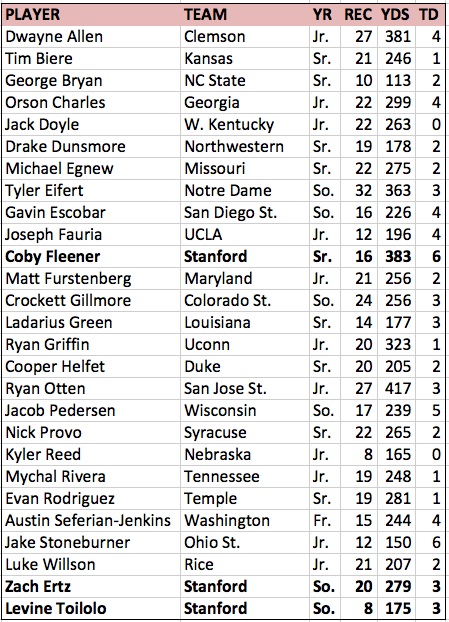 While the members of Tree's Company will look to add to their impressive numbers, the Cardinal defense must contend with the only freshman on the midseason watch list, Austin Seferian-Jenkins. Expect tight ends to feature prominently in tomorrow's (not so) preposterous predictions.