Share All sharing options for: Stanford vs. Oregon State: Best and Worst

Before we turn our full attention to Oregon 'round this site, here are some of the best and worst moments from Saturday's 38-13 win in Corvallis. 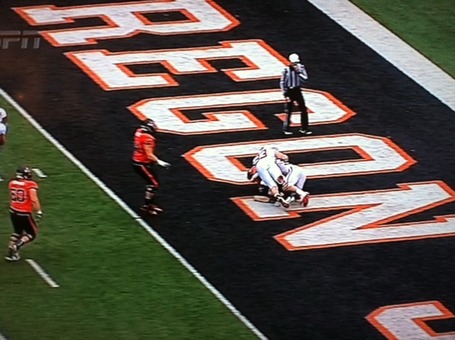 Worst Call: Wow, so many to choose from. There was the takedown of Terrence Stephens that allowed Sean Mannion to find Joe Halahuni for a big gain that put the Beavers inside the Stanford 5-yard line. There was the mysterious fair catch called by Drew Terrell. But the safety that somehow wasn't on Oregon State's first possession takes the cake. That was an egregiously bad call.

Best Sure Thing: Jeremy Stewart, who carried nine times for 47 yards and a touchdown and converted several times on third and short.

Worst Pass: Andrew Luck looked out of sync in the first half and was intercepted by Michael Doctor on a play where he would've been better of taking a sack or throwing the ball away. 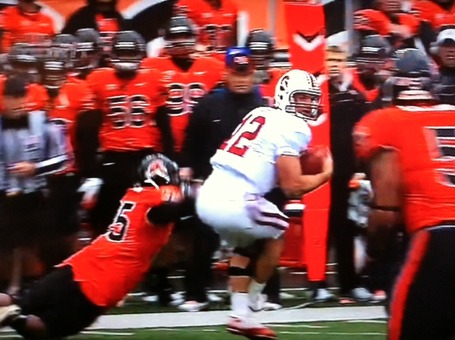 Best Spin Move: WOOP! Luck left OSU freshman defensive end Scott Crichton grasping for air with a devastating spin move to pick up the first down on a third down run in the second half.

Worst Drop: Stanford had a chance to score on its first drive, but Luck's deep pass for Coby Fleener was dropped in the end zone. The pass was a little bit underthrown, but it still should've been caught. Fleener's problem may have been that he tried to use two hands.

Best Hurdle: Stepfan Taylor rushed for 39 of his 95 yards on one drive in the third quarter, which included a hurdling act, or as RedOscar put it, a Joseph Fauria impression, for a 7-yard gain. Taylor capped the scoring drive with a 27-yard touchdown catch. 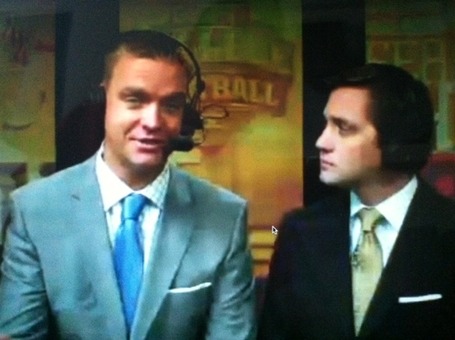 Worst Color Commentary: Brock Huard and Carter Blackburn were back in the booth. Huard likely left a lot of you reaching for the mute button.

Best Kicking Defense: Fleener made up for his earlier drop by blocking Oregon State's 50-yard field goal attempt on the final play of the first half. Ben Gardner blocked an extra point later in the game.

Worst Scene: Chris Owusu on the turf after taking yet another hit to the head.

Best Moment: Owusu giving the thumbs up as he was loaded into the ambulance.

Worst Penalties: On its first drive of the second half, Stanford was whistled for holding, a personal foul, and a false start.

Best Catch: Whalen, who had a team-high six catches for 87 yards and a touchdown, made an acrobatic grab along the Stanford sideline in the fourth quarter.

Worst Cheapshot: On the same play, Cameron Collins delivered a helmet to helmet hit on Luck and was flagged for roughing the passer. 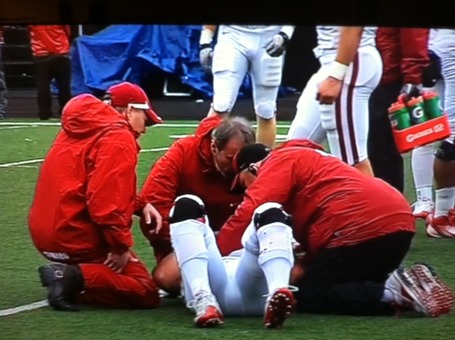 Best Footwear: The Stanford training staff was unfortunately busy on Saturday. I couldn't help but notice the boots on the left. Are those Nikes?

Worst Kickoff: Eric Whitaker converted his only field goal attempt and all five extra points, but he booted another kickoff out of bounds.

Best Break: Trailing 17-13, Oregon State appeared to convert a 3rd and 11 with a screen pass to Brandin Cooks. The 30-yard play was negated by a ticky-tack holding penalty on Markus Wheaton. Mannion threw incomplete on the next play and the Beavers punted.

Worst Side Judge Wipeout: On the same play, Cooks sent the side judge, Bernie Hulscher, sprawling on the Reser Stadium turf. Cooks certainly didn't mean to take out Hulscher, but it was quite a collision.

Best Costume: As spotted by a couple of commenters in the Game Thread, one Oregon State fan wore a Guy Fawkes mask. "Remember, remember, the 5th of November." Well done, sir. 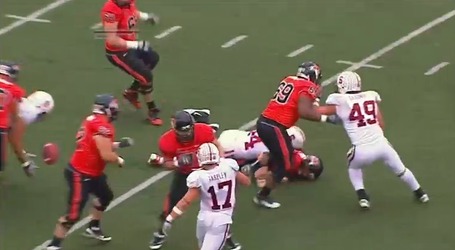 Best Series: Stanford sacked Mannion on the Beavers' first play from scrimmage but didn't get to the redshirt freshman quarterback again until late in the third quarter. When the pressure finally came, it came in waves. Mannion was pressured on first down and threw incomplete. Trent Murphy sacked him on second down for a loss of seven. On third down, Chase Thomas sacked Mannion and forced a fumble, which was recovered by Matt Masifilo. The Cardinal scored three plays later to take a 31-13 lead.

Worst Decision to Punt: Trailing 31-13 with 13 minutes to play, Mike Riley elected to punt on 4th and 7 from inside Stanford territory. The Beavers downed the ball at the Stanford 5, but was there any reason to believe that the OSU defense could stop Luck and the Cardinal?

Best Drive: No, no there wasn't. Stanford chewed up more than 7 minutes of the clock with a 13-play, 95-yard drive capped by a Tyler Gaffney touchdown run. Gaffney had seven of his 12 carries on the drive.