Stanford vs. UCLA: Best and Worst

Share All sharing options for: Stanford vs. UCLA: Best and Worst

Here's a quick look at the best and worst from Stanford's 45-19 win over UCLA.

Best Goal Line Stand: Stanford, which avoided falling behind for the first time all season after UCLA marched down the field on its first drive. The stand, which included stops by Trent Murphy, Matt Masifilo, James Vaughters, AJ Tarpley, Jarek Lancaster, and Chase Thomas, reminded head coach David Shaw of his time as an assistant with the Baltimore Ravens. "Ray Lewis used to always say, 'Opportunity for greatness.' Ball's on the 1-yard line it's an opportunity for greatness. Our guys stepped up to the challenge and did a good job."

Worst Decision/Best Hit: Tyler Embree should've called for a fair catch. Instead, he was walloped by Stanford freshman wide receiver Ty Montgomery, who forced a fumble and all but ended any hopes of a UCLA upset. 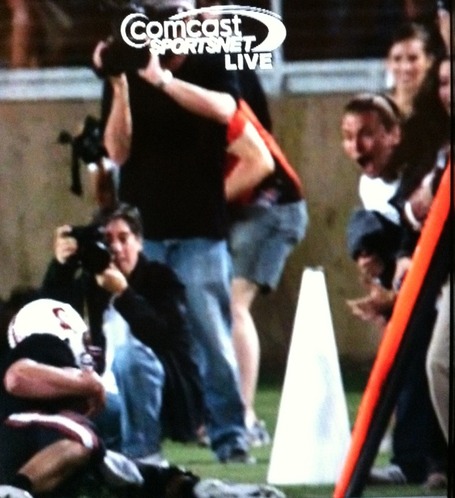 Best One-Handed Catch By a Quarterback: Andrew Luck, whose acrobatic grab on Stanford's first drive had everyone reaching for the remote and/or looking like the fan on the right. "I just tried to put my hands up [Editor's Note: hand] and catch the ball and hope I had a foot in bounds," Luck said after the game.

Best One-Handed Catch by a Non-Quarterback: Coby Fleener, whose touchdown pass in traffic was almost as pretty as Luck's grab, according to this reviewer. Cast your vote here. "I knew Andrew was trying to make me look bad with his one-handed catch so I felt like I had to one-up him," Fleener said.

Best Fan Support: Stanford Stadium sold out for the fifth time since the renovation in 2006. Expect a few more sellouts this season. 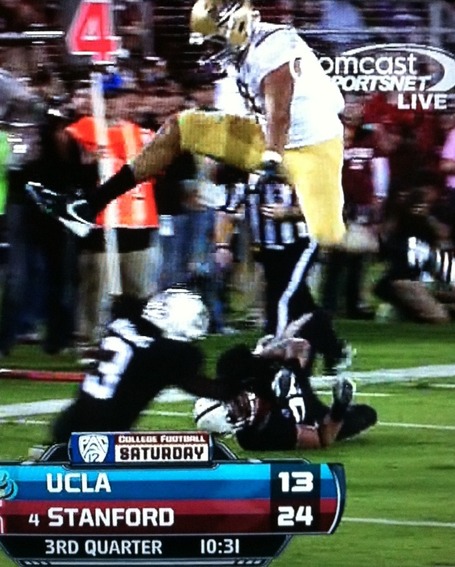 Best TE Who Doesn't Play for Stanford: Joseph Fauria caught three passes for 43 yards and two touchdowns. The 6-foot-8 Fauria made a leaping grab in the end zone for his first TD and added another in the third quarter after catching a short pass and hurdling Michael Thomas.

Best Preposterous Prediction: Andrew Luck will complete at least 80% of his passes. How 'bout 85%? 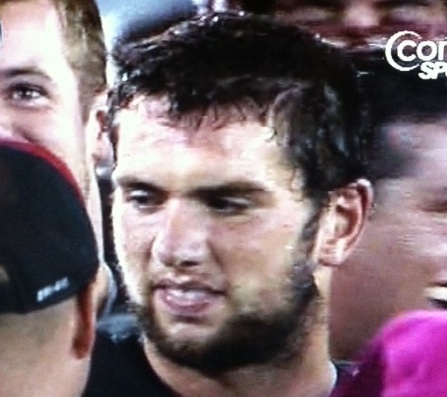 Best Beard: Luck. It's back, baby. Print your own for the Colorado game.

Worst Start Time/Best Formation: I dozed off late in the third quarter and had a dream that Gaffney lined up in a WildCard formation and ran for a touchdown. Oh, that actually happened? Crazy.

Best Comeback: Stanford trailed 99-0 early in the first quarter according to the ESPN bottom line. 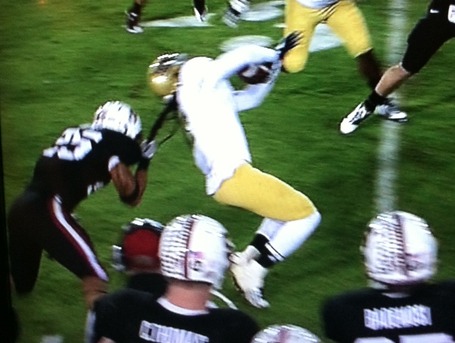 Worst Penalty Call: Of Stanford's season-high 7 penalties for 80 yards, at least one of them was undeserved. Tyler Gaffney was flagged for a horse collar tackle after pulling UCLA kick return Josh Smith to the ground by his dreadlocks. (It's perfectly legal to pull a player down by his hair, which is one reason that fewer offensive players sport long hair than defensive players.) A questionable pass interference call on Jarek Lancaster wiped out an interception by Devon Carrington. 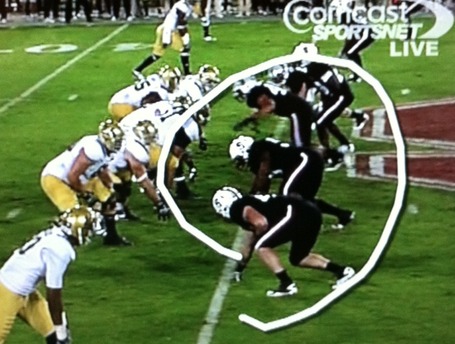 Best Timing: With jumps like this, it's no wonder Ben Gardner leads the Pac-12 in tackles for loss. He recorded one of his two QB hurries on this play, forcing an incompletion on third down in the third quarter.

Worst Kicker: A Stanford blowout victory in 2011 just wouldn't be complete without an abysmal showing by the opposing team's kicker. UCLA's Jeff Locke delivered, missing two extra points. What can Colorado's Will Oliver possibly do to top that?