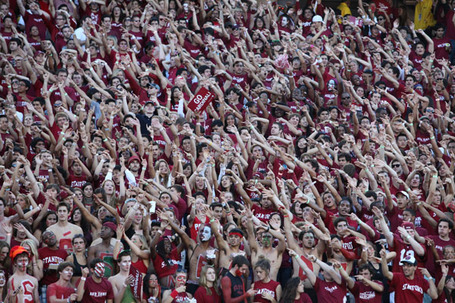 If this photo had been taken with a wider lens, you would have probably seen an empty section just above these students. (via Where did all the fans go?  Jonathan York/www.stanforddaily.com)

Remember this?  And this?  And this?  And a whole slew of other blog posts, articles, and editorials from all across the country wondering how a 12-1 college football team only sold out its stadium once (to USC)?  Well, it seems Stanford Marketing and the Ticket Office didn't grasp the embarrassment of last year.  That or they're sticking their fingers in their ears and hoping for some sort of miracle.

Stanford is a different kind of college campus.  There are no die-hard, must-win-at-all-costs fanatics at Stanford or in the surrounding community.  It's an equal opportunity supporter.  Palo Altans and other Stanford fans are just as likely to attend a Men's Volleyball match as they are a women's match as they are, yes, football.  Football doesn't get elevated here just because it's got notoriety on ESPN and ABC7's After the Game.  It just happens to be a Stanford sport that gets a lot of publicity, for one reason or another.  Even alums, both young and old, aren't wont to travel religiously to away games, or heck, even home games, if only for the fact that a huge number of them don't even live within 500 miles of Stanford.

That said, what in the world is Stanford thinking limiting single-game tickets to only four of the seven home games this year?
Since Stanford reduced the size of Stanford Stadium, it hasn't even begun to figure out how to sell tickets for big games such as Big Game, Notre Dame, USC, and for this year, Oregon.  In 2006, Stanford added almost 10,000 season ticket holders to its base, thinking that most of these new ticket holders were people from across Northern California wanting to see the new stadium.  Instead, a fairly large number of the season ticket holders were USC fans who bought season tickets to get into their game against Stanford and only the USC game, leaving large swaths of empty seats across the entire stadium for the rest of the season.  People rationalized it at the time as being a consequence of having a 1-11 season.

The following year, Stanford limited Big Game tickets to California, causing a mini-uproar among Old and Young Blues when Cal Athletics instituted minimum donation requirements to even be considered for getting tickets.  Result?  Cal didn't sell out their allotment and at least two sections above the North Endzone on the second tier went empty until people started shifting around when they realized no one was coming at halftime.  Unintended consequence?  As a season ticket holder, I was wondering how my usually empty seats around me were filled with Cal fans on the South Side of the stadium.  Turns out they bought one of Stanford's mini-plans to get a Big Game ticket without the exorbitant donation requirement and only attended Big Game, leaving the other tickets to gather dust at home.  They didn't even bother to resell them.  Another consequence?  The unsold tickets from Cal went back to Stanford for day-of sales, and they didn't even sell out because so many in the Bay Area are conditioned to think that Big Game sells out in advance of the actual game.

In 2009, almost the exact same thing happened again.  Despite the North Side of the Stadium being dedicated as the Cal cheering section, Cal fans bought up mini-plans and filled the almost-always empty top tier of the South Side of the stadium (my poor parents were one of a handful of redshirts in a sea of blue...).  The empty sections above the FG posts on the North Side were empty again for Big Game until about midway through the game, although I have no idea whether or not Cal had the donation requirement again (as a side note, single Big Game tickets were made available to anyone who wanted tickets a week before the game, not solely Stanford fans, so Cal fans had ample opportunity to buy up tickets as did Stanford fans and the tickets still went unsold, something Cal fans fail to mention when they complain about Stanford preventing them from attending Big Game in Palo Alto).  In an interesting twist, Stanford actually sold out the Notre Dame game the following week in part because the ticket mini-plans that Cal fans had purchased stipulated that unless you bought full season tickets, you could either get tickets to Big Game OR the Notre Dame game.  Not surprisingly, Notre Dame fans snatched up that deal like hot cakes when they were made available, and Stanford Stadium was about 50-50 ND-Stanford fans, hardly a home team advantage.

This past year, USC students, savvy to the ways of the Stanford Athletics Ticket Office, followed their alums' lead and bought up season ticket mini-plans.  While the Southwest lower corner of the Red Zone was dedicated to Stanford students, a large portion of the Southeast upper corner contained SC students and young alumni.  Not surprisingly, those seats went empty for the rest of the season.

So why does Stanford Athletics insist on selling mini-plans?  Five years into the new configuration of the stadium, all what the mini-plans have done is enabled visiting schools' fans to buy up tickets at a premium price (that are sometimes comparable to single game tickets at their own stadiums) and throw the rest of the tickets away.  For 2011, Stanford has barred single-game tickets for Oregon, Cal, and Notre Dame.  The Notre Dame game, a game available only under a mini-plan, has already sold out (and I'm pretty sure that a vast majority of the tickets sold didn't go to Stanford fans); the only way to get into the Notre Dame game now is to, what else, buy either a mini-plan or a full season ticket package.  Cal and Oregon are also games only available under mini-plans.

What the mini-plans will do is assure Stanford of at least two, maybe three sell-outs (if Cal Athletics can sell out its allotment this time).  It also assures Stanford Athletics of seats being sold for its other four games, with the Lotsa Luck mini-plan requiring one of the marquee games and two of the remaining games.  Unfortunately, it doesn't assure the department of people actually showing up for the games.

One of the curious things mentioned in the SF Chronicle article mentioned above is that Stanford actually had a BETTER attendance record in 2006 than they did in 2010.  Why?  Because Stanford, like all other college athletic departments, counts seats sold as its attendance record, not tickets scanned.  As such, I understand Stanford's desire to sell as many seats as possible to football games, even if people don't show up for their ticketed games.  Revenue is revenue, whether someone shows up or not.  Unfortunately, these mini-plans lead to the "STANFORD HAS TERRIBLE ATTENDANCE" stories since the people who buy the mini-plans usually aren't Stanford fans themselves.  Of the other Pac-12 schools, only OSU and UCLA offer mini-plans as part of their football marketing plans, and they can do so because they have the alumni numbers, stadium size, and community support to prevent opposing fans from buying them up.  Stanford can't do that.

So why does Stanford require season tickets or mini-plans to get to those three big games?  History says those three games will do well in terms of attendance, but at the cost of (very) poor attendance for the other four.  OSU and UCLA also sell single-game tickets in addition to their mini-plans, so people don't have to buy the mini-plans to attend the game.  Stanford's attempt to rectify this with the Family Plan has gained a lot of traction for filling the North Side upper deck, but the Family Plans don't guarantee tickets to all games, in particular Big Game.  Granted, there's no assurances that Stanford would be able to sell those unused mini-plan tickets as single-game tickets, but it certainly seems as though Stanford is throwing in the towel in ticket sales and sacrificing attendance for money.  While that's maybe a good business model, it does very poorly in terms of selling the actual product on the field what with the empty seats that will almost assuredly make their annual reappearance, no matter how good that product may be.