Stanford vs. USC: Best and Worst

Share All sharing options for: Stanford vs. USC: Best and Worst

Here's a look back at some of the best and worst moments from Stanford's 56-48 3OT thriller against USC.

Worst Injury Bug: Saturday's win came at a cost. Jordan Williamson tweaked something during pregame warmups, Zach Ertz was injured on the opening kickoff, Terrence Brown and Jonathan Martin were shaken up, and Chris Owusu took another hard-to-stomach shot to the head. The Cardinal has two weeks to get healthy for Oregon. 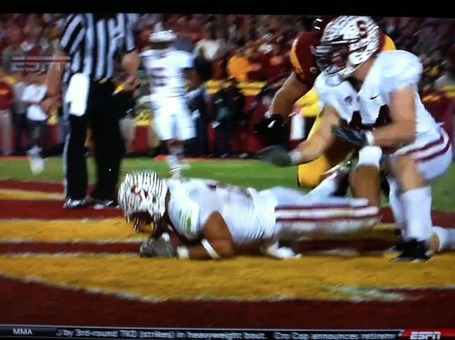 Best Turnover Machine: AJ Tarpley fell on Curtis McNeal's fumble in the end zone in triple overtime to seal Stanford's 56-48 win. Terrence Stephens stripped the ball at the line of scrimmage with a mighty swipe of his hand while being taken to the ground. Earlier in the game, Tarpley jumped a Matt Barkley pass on an out pattern for his first career interception. As Kirk Herbrstreit pointed out, Barkley locked in on his intended receiver, Tarpley read his eyes and made a perfect play on the ball.

Worst Special Teams: With Jordan Williamson out, Eric Whitaker handled the kicking duties for Stanford and booted two kickoffs out of bounds. That's pretty inexcusable. Not to be outdone,  punter Daniel Zychlinski had an 18-yard punt.

Best Special Teams: Whitaker made his only two field goal attempts and all six of his extra point attempts, even if his last one was a little too close for comfort. Zychlinski atoned for his mistake, too, helping pin USC at its 1-yard line with Stanford needing a stop late in the fourth quarter. Drew Terrell had a nice punt return to set up the field goal that tied the game at 27.

Worst Luck: Nickell Robey intercepted an Andrew Luck pass on 3rd and 3 and returned it 33 yards for a touchdown to put USC ahead 34-27 with 3:08 to play. 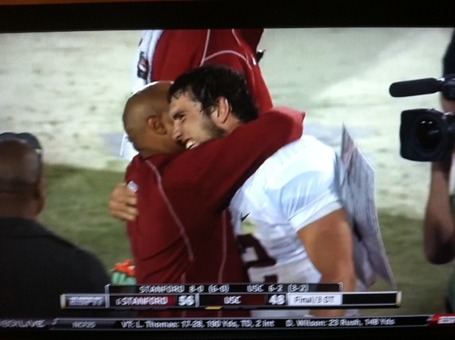 Best Luck: Luck marched the Cardinal 76 yards on 10 plays on its ensuing drive for the tying touchdown and was masterful in overtime, completing all five of his pass attempts. He finished 29-of-40 for 330 yards, 3 touchdowns, and 1 interception. His coolness under enormous pressure helped solidify his stranglehold on the Heisman trophy.

Worst Prediction: Me: "Stanford 48, USC 24. The Trojans' offense will provide a real test, but USC doesn't have the defense to match." Whoops. The Trojans have one hell of a football team and the players were clearly as motivated as they've been all season. That was a far cry from the team that eked by Minnesota in September.

Best Comedic Timing: After Luck took a minor shove in the back out of bounds on a designed run in the fourth quarter, he went flying in an apparent attempt to draw a penalty for a late hit. No flag was thrown. As Luck jogged back to the huddle and exchanged a quick laugh with the official, Brent Musburger remarked, "Luck was a soccer player as a youngster growing up in Europe." Whether or not the timing was intentional, it was fitting. 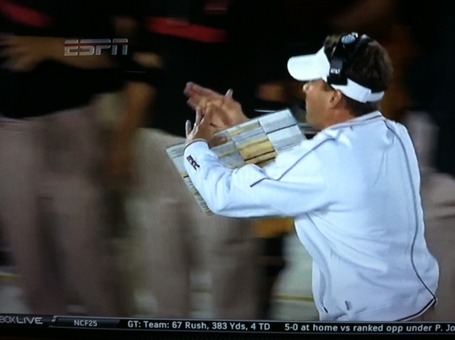 Worst Awareness: I think jterry94 hit the nail on the head on Robert Woods' boneheaded play at the end of regulation. It was up to one of the assistant coach's or Lane Kiffin himself to remind the players that the Trojans had timeouts remaining and to just go down after making a catch, rather than trying to get to the first down marker and get out of bounds.

Best Incorrect Spot: Officials screwed up the spot of the ball after Geoff Meinken was called for a hold in the second overtime. The ball was moved back 10 yards from the end of the run as opposed to the spot of the foul, giving Stanford a 2nd and 7 instead of a 2nd and 15. Given how tired both defenses appeared, it might not have mattered, but it was a bad break for the Trojans. 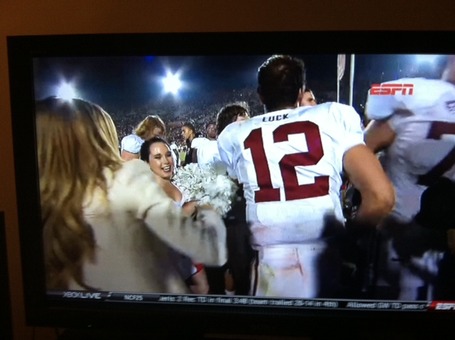 Best Juke: Erin Andrews had to work to catch up with Luck for an on-field postgame interview.

Worst Penalties: Stanford committed a season-high 11 penalties for 91 yards, while USC was penalized only three times for 35 yards. One of those three, however, gave Stanford a first down on its game-tying drive at the end of regulation. TJ McDonald was flagged for a personal foul after his hit to Owusu's head. As Musburger and Herbstreit pointed out, it was the correct call, but an unlucky one for McDonald. He launched himself forward and had committed to hitting Owusu low, but as Owusu fell to the ground McDonald caught him at head level.

Best Opening Drive: Stanford received the opening kickoff and drove 83 yards on 10 plays (5 runs, 5 passes) for a touchdown. Luck was 5-for-5 for 74 yards with completions to five different receivers. So much for a slow start.

Best Balance: Tyler Gaffney, who somehow managed to stay on his feet after getting hit low by Hayes Bullard and then stretched the ball across the goal line for Stanford's first score.

Worst Playcall:  On 3rd and 9 from the USC 20 and trailing by a field goal, Stanford split Luck out wide and had Gaffney take a direct snap. "You and I are sitting here wondering, third and long and you've got Andrew Luck and they decide to take the ball away from Andrew Luck and put it in a.running back's hands," Herbstreit said. "Surprising call by Pep Hamilton and Stanford there to not allow Luck to throw it."

Best Performances by Freshman WRs: Ty Montgomery had 5 catches for 87 yards, including a 62-yard grab on a trick play that started with Luck split out wide and a couple of big catches in overtime. He also made a nice tackle of Woods in punt coverage. USC's Marqise Lee had a team-high 9 catches for 89 yards and a touchdown.

Best Pass Rush: USC's front four was a force all night. The unit put all sorts of pressure on Luck and had two sacks, one of which took Stanford out of field goal range in the fourth quarter. Stanford had allowed two sacks all season before last night.

Worst Way to Watch a 3OT Thriller: On an iPhone with spotty coverage on the Metro. Never again. Siri, where's the closest hospital? I think I'm having a heart attack.

Best Breakout Performance: After Marc Tyler was injured on his first carry of the game, Curtis McNeal took advantage of the added workload. The junior running back ran for 145 yards and two touchdowns on 20 carries. McNeal's 61-yard touchdown run down the left sideline early in the second half gave Stanford its first deficit of the season.

Worst Tackling: Tackling didn't seem to be as much of an issue against USC as it was against Washington, but Jarek Lancaster, Tarpley, Devon Carrington, and Johnson Bademosi all whiffed on chances to bring down freshman tight end Randall Telfer on his touchdown grab in the second overtime. Woods finished with 9 catches for 89 yards, but he didn't have a reception of longer than 19 yards. 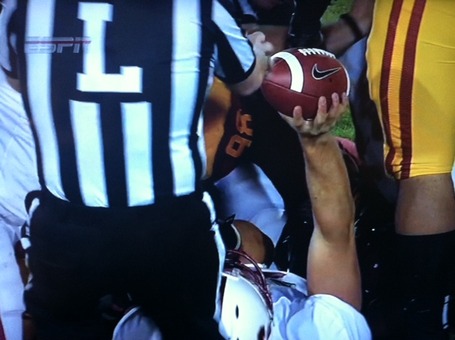 Best Fumble Recovery That Didn't End the Game: On the series after USC took its first lead, the Trojans forced a three and out and nearly forced a turnover. Defensive end Wes Horton, who finished with two tackles and a sack, drilled Luck on third down and the ball popped out. Somehow, Luck emerged from the scrum with the ball.

Best Field Goal: USC freshman Andre Heidari, who injured his ankle against Notre Dame and was questionable for Saturday's game earlier in the week, booted a 50-yard field goal in the final minute of the first half to pull the Trojans to within 10-6. 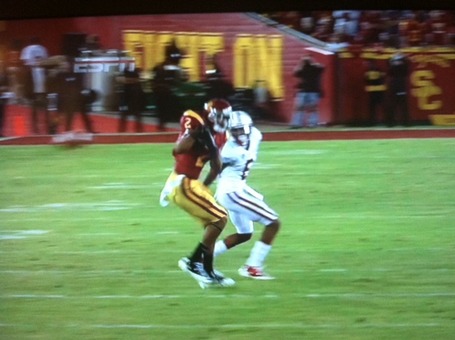 Worst Drops: Woods had several crucial drops. Late in the first half, he dropped a quick slant that Terrence Brown jumped. It would've gone for a touchdown. Lee dropped what would've been a significantly more difficult catch in the end zone on a post route. 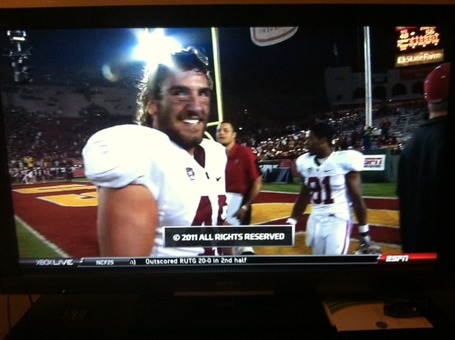 Best Way to End a Broadcast: A beaming Ben Gardner, rocking the mullet. This just screams "It's All Right Now."