Share All sharing options for: Stanford vs. Cal: Big Game Best and Worst

Here's a look at the best and worst moments from Stanford's 31-28 win over Cal in the 114th Big Game.

Best Result: It wasn't always pretty, but it was still a Big Game win. We've got the Axe for another year.

Worst Start: Zach Maynard threw a 42-yard strike to Keenan Allen on Cal's first play from scrimmage. It was a bad sign of things to come for the Stanford secondary. 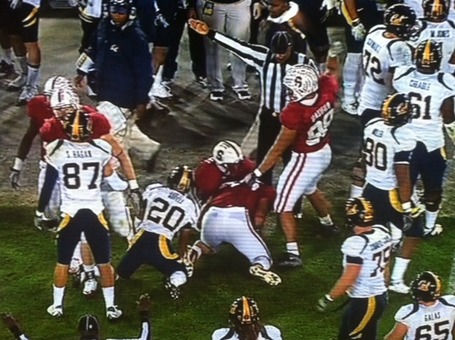 Best Celebration: Stanford caught a break on the very next play, when Maynard botched a pitch to Isi Sofele and Brent Etiz recovered for Stanford in front of the Cal sideline. As the official signaled that it was Stanford ball, Matt Masifilo broke into a terrific celebration dance. He may have simply been signaling that it was the Cardinal's ball, but I'm going to continue to believe that Masifilo is swinging an imaginary lasso over his head. The photo above doesn't do the dance justice. 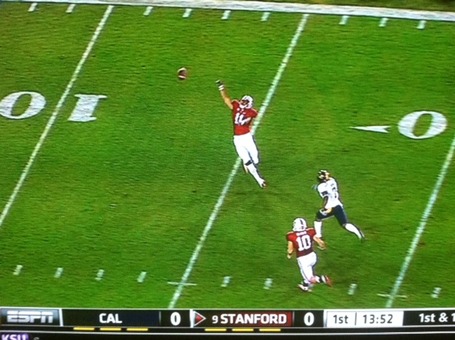 Worst Throw: A completion to Ty Montgomery and a personal foul on Sean Cattouse moved the ball to the Cal 34 on Stanford's ensuing drive. On first and 10, Andrew Luck rolled to his right on play-action out of a jumbo set. Levine Toilolo was wide open for what would have been a sure touchdown, but Luck overthrew the 6-foot-8 tight end.

Best Freshman: Montgomery scored on a 34-yard reverse on Stanford's next play, giving the Cardinal a 7-0 lead. The freshman finished with a game-high 170 all-purpose yards, including three catches for 45 yards. Montgomery also made a solid tackle as the gunner on punt coverage. 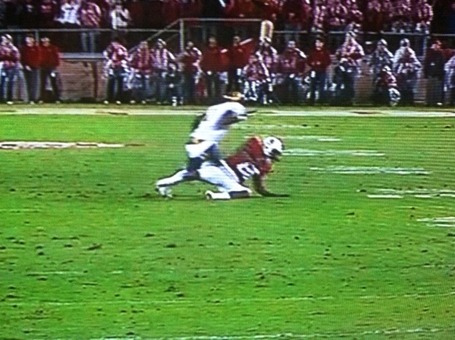 Worst Field: For the second consecutive week, players from both teams were slipping and sliding as a result of the terrible field conditions at Stanford Stadium. (At times, the wet turf was the Cardinal's surest tackler.) The field conditions may have been partly to blame for Luck's first quarter interception. Montgomery slipped while coming out of his break and Luck's pass went straight into the arms of Steve Williams, who returned it to the Stanford 4. A penalty on the return moved the Bears back, but Cal scored three plays later on a 17-yard touchdown pass from Maynard to Allen. 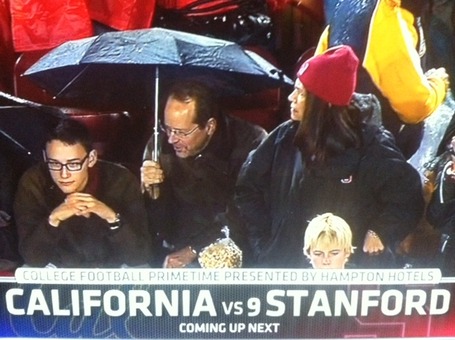 Best Fans: Everyone -- Cal and Stanford supporters alike -- who endured a rainy Saturday night in Palo Alto. Some of the shots made it look like a pretty miserable experience.

Worst Luck: Besides the interception, which wasn't entirely his fault, Luck was only 8-for-15 for 81 yards in the first half. In addition to his misfire on the play to Toilolo, Luck overthrew Griff Whalen a couple of times.

Best Luck: The redshirt junior rebounded in the third quarter, completing 8-of-10 passes for 135 yards and two touchdowns.

Worst Kick: Jordan Williamson, who returned to action after missing the previous three games with an injury, missed a 33-yard attempt late in the first half. The Cardinal was 58-for-58 in the red zone this season before the miss. 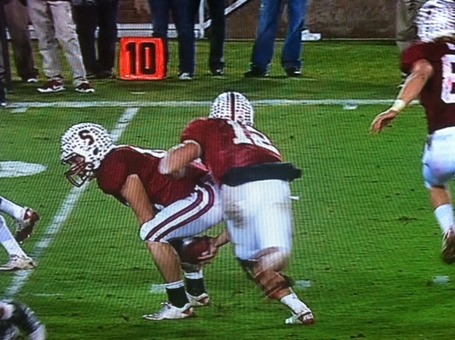 Worst Trick Play: On its first drive of the second half, Stanford attempted a trick play from inside the Cal 10, with Luck handing the ball to fullback Geoff Meinken between his legs. The Cal defense wasn't fooled and Meinken, better known for bulldozing tacklers in his path, was stopped for a 1-yard gain.

Best Redemption: Two plays after the failed trick play, Toilolo made up for an awful drop earlier in the drive with a 4-yard touchdown grab.

Best Playcall: On 3rd and 14 from the Stanford 18 in the third quarter, Pep Hamilton dialed up a screen pass to Stepfan Taylor that went for 23 yards. It was the perfect call and it led to a Luck touchdown pass to Ryan Hewitt to put the Cardinal ahead 28-13.

Best Company: Taylor had only 46 yards rushing on 16 carries, but that was enough to go over 1,000 yards for the season. The junior joins Darrin Nelson and Toby Gerhart as the only Stanford running backs with multiple 1,000-yard seasons. 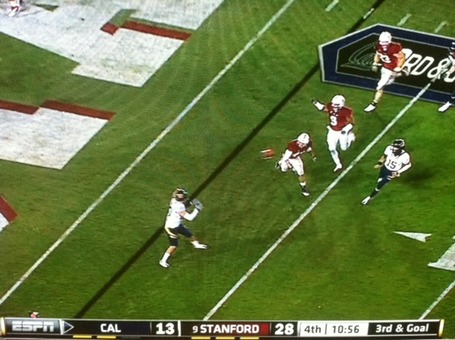 Best Performance By a Bear: Maynard, who entered the game with a 55% completion rate and had two games with at least three interceptions, was very impressive. He finished 20-for-30 for 280 yards and two touchdowns, including a nifty pass to Spencer Hagan on 3rd and goal. Maynard rolled left, waited for the Stanford defense to commit to the run, and then flicked a short pass to Hagan for the easy score. 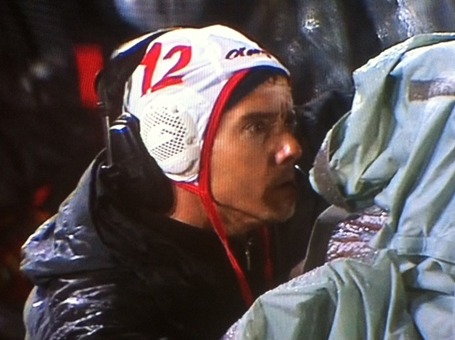 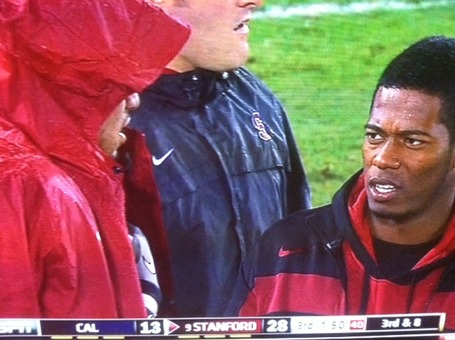 Worst Injuries: It was sad to see Chris Owusu on the sideline for his last Big Game. It also wasn't good to see Toilolo (that's him in the red raincoat) sidelined with an injury in the second half.

Best Badass: Ryan Hewitt was an absolute beast, especially on Stanford's game-clinching, 14-play, 7-minute drive in the fourth quarter. He finished with a game-high 7 catches for 64 yards and a touchdown. His two rushes for 7 yards both picked up first downs on third and short on the Cardinal's final drive.

Best Field Goal: Williamson booted a 35-yard field goal with 3:07 to play that gave Stanford a 31-21 lead. Some fans probably thought David Shaw should've gone for it on 4th and 2, but he showed confidence in his kicker and Williamson redeemed himself with a clutch kick that proved to be the difference in the game.

Worst Clock Management: Needing two scores, the Bears didn't seem to have much of a sense of urgency on their next drive. By the time CJ Anderson rumbled in from 1-yard out, only 14 seconds remained. Leaving a little more time wouldn't necessarily have mattered, but it still seemed weird.

Best Hands: Coby Fleener, who recovered the onside kick to seal the win. 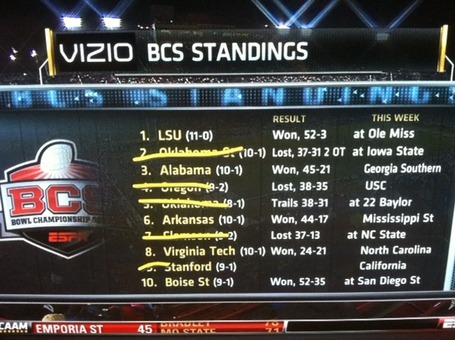 Best Chaos: It was fun to watch the names of teams ahead of Stanford in the BCS rankings get crossed out, even if the man working the telestrator was Brock Huard.