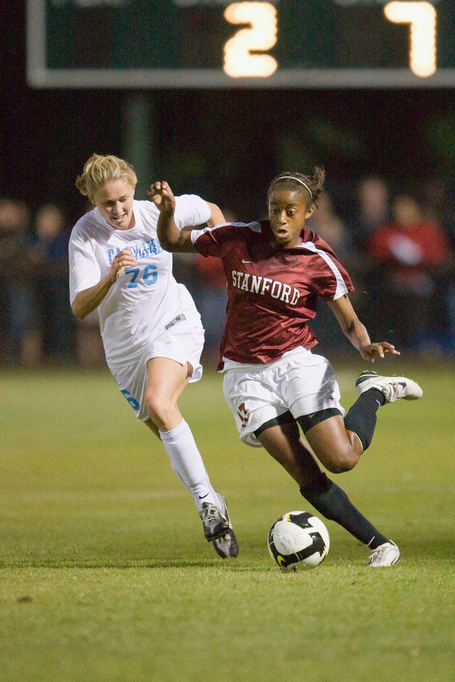 Today officially marks the start of the athletic year for Stanford. While Field Hockey and Men's Soccer have played exhibition games earlier this week, tonight's women's match against Penn State at Cagan Stadium will be the first official NCAA game by any Stanford team for the 2011-2012 school year.

So here we are, after two months of a lull in activity, Stanford is back at it again. The women are ranked #2 in the nation, behind only defending national champion Notre Dame. If you're in the Bay Area, come by and watch an extremely talented soccer team attempt to repeat their undefeated home season. If we're lucky, the all new east side seating will be open. From GoStanford:

In 2011, a new seating section was completed to the east side of the field, adding 400 individual seats and a permanent press box area. This will bring the maximum capacity to 1,952.

I'll post a picture later today, but from what I saw earlier this week, there still was a lot of dirt and yellow tape around the entryway to the new seating. But the structure itself looks pretty much finished. It's an interesting design featuring a canopy press box and no field level spectator seating, as I'm assuming the teams will actually be sitting under the spectator seats. An unfortunate tradeoff is that the green fence behind both goals, which went up two years ago during NCAA play, are now permanent, meaning SAE and KappaSig members will have to scan their SUIDs in order to antagonize goalies -- from the sidelines (hey, students still get in free!). It makes sense, though, considering that previously those spots provided free game views while people in the stands paid to watch the same game.