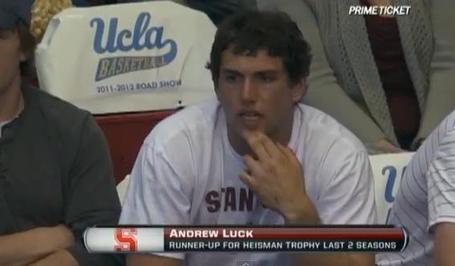 The Cardinal's leading scorer Josh Owens took only one shot in the first half and finished with six points.That's not a recipe for success. | Mercury News

Stanford fell to seventh place in the Pac-12, hasn't won anywhere in L.A. except the Staples Center since 2005. | SF Chronicle

The Bruins were happy to avenge a 1-point loss at Maples Pavilion earlier this season. | Bruins Nation

Nneka and Chiney Ogwumike combined for 43 points, dominated the Battle of the Sisters. | The Stanford Daily

Carolyn Peck was watching, means no disrespect to Stanford with her comments. Duke struggled to beat a Boston College team that has lost 11 straight, by the way. I guess that just goes to show how tough the ACC is top to bottom! | Twitter

Eno Sarris takes a look at the state of sabermetrics in college baseball -- including at Stanford -- after attending Wednesday's NorCal Baseball Media Day. | FanGraphs