I'll address the Jim Harbaugh speculation (his bro says Michigan is out) and Andrew Luck's future later tonight and in the coming days, but first I'll honor Harbaugh's wishes and "respect the game" with this look back at the best and worst from Monday's Orange Bowl. 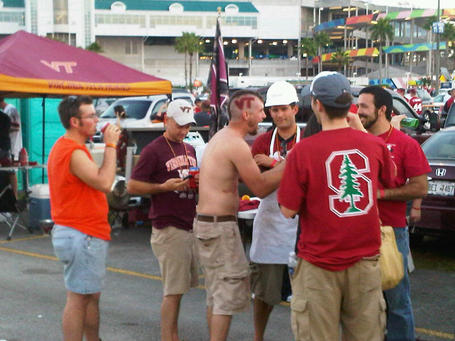 Best Tailgate: Toby the Van. Brian, Wade, and Toby were terrific hosts in the shadow of Sun Life Stadium. Stanford revelers came for the food and drink and stayed for this entertaining Hokie fan. I didn't attend, but I hear the alumni tailgate was a good time.

Best Performance, Expected Edition: Andrew Luck, who was a masterful 18-for-23 for 287 yards and four touchdowns. He looked a little off early in the game and he got away with a bad decision that should have been Jayron Hosley's second interception, but he settled down and made some incredible throws.

Best Use of Foam: A number of fans had tree-shaped foam fingers, which I was told were given away at Sunday night's pep rally. Had I known that, I would've arrived a day earlier.

Worst Use of Foam: Taco Bell was giving away taco-shaped hats and samples (of food, not foam) inside the Game Day Fan Zone.

Best Houdini Act: Tyrod Taylor, whose touchdown pass to David Wilson in the second quarter was one of the best plays you'll ever see. Taylor was sacked eight times, but it really felt like it should've been 15. It was torturous to watch him wiggle his way out of trouble in the first half. The reaction from Stanford fans in the stadium went something like this: "Oh! Yes! Get him! GET HIM! No! GET HIM!!!!!!! NOOOOO. Crap." From the upper deck, Taylor looked like Pac-Man with an endless supply of power pellets dodging ghosts up and down the field.

Best Second Half Adjustment: Vic Fangio's Stanford defense, which shut out the Hokies after halftime. Shayne Skov led the way with 12 tackles and three sacks.

Best Use of Hands: Delano Howell, who stepped in front of Jarrett Boykin to intercept Taylor at the Stanford 3-yard line with the Cardinal leading 19-12 in the third quarter. Taylor had floated a 42-yard pass to Danny Coale just over the outstretched arm of a leaping Chase Thomas earlier in the drive and seemed poised to lead the Hokies for the tying score.

Worst Use of Hands: Virginia Tech fan who flipped off the videoboard camera. On the whole, Hokies fans I met in Miami were very nice.

Best 2-Play Drive: Stanford, which went 97 yards in 29 seconds after Howell's interception to increase its lead to 14. Stepfan Taylor broke off a 56-yard run before Luck found Fleener wide open down the middle for his first touchdown of the game. 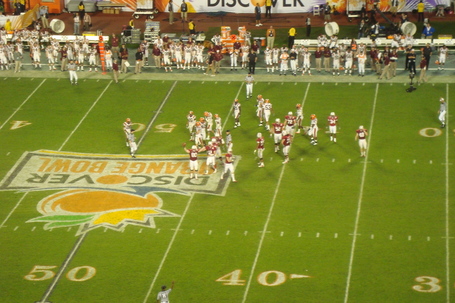 Best 7-Yard Run: James McGillicuddy, the sixth-year senior lineman and fan favorite, who ran off the field to some of the loudest cheers of the night after his first and only career carry.

Worst Reflex: Derek Hall, who caught Luck's batted pass in the back of the end zone for a safety in the first quarter.

Best "Musical" Act: The one, the only, the truly incomparable Leland Stanford Junior University Marching Band. The LSJUMB mocked LeBron James' "Decision" in an on-field performance before the game. It also played near Toby the Van on its way to the Fan Zone.

Worst Special Teams: Nate Whitaker missed two extra points and Drew Terrell fielded a punt inside his own 5-yard line. In the end, it didn't matter. Both players had very good seasons.

Worst Surprise: Three times, the game official forgot to turn off his microphone before blowing his whistle after announcing a penalty call. As my friend remarked, "I think my ears are bleeding." Cardinal red, of course.

Best Fans: There were a lot of opportunities to cheer, and cheer the Cardinal fans did.

Best Chant: THANK YOU SEN-IORS! It was short-lived, and it was drowned out by the chants of STAY! HARBAUGH! STAY! and ONE MORE YEAR!, but it was the most fitting.

Best Celebration: Oranges and smiles all around.

Best Postgame Text Message: From a friend and Hokies fan, who, like me, is a suffering Redskins fan. "So um...Stanford is awesome at football and I want andrew luck to be a redskin. Holy crap." (Washington Post sports blogger Dan Steinberg's Best-Worst lists inspired this post.) 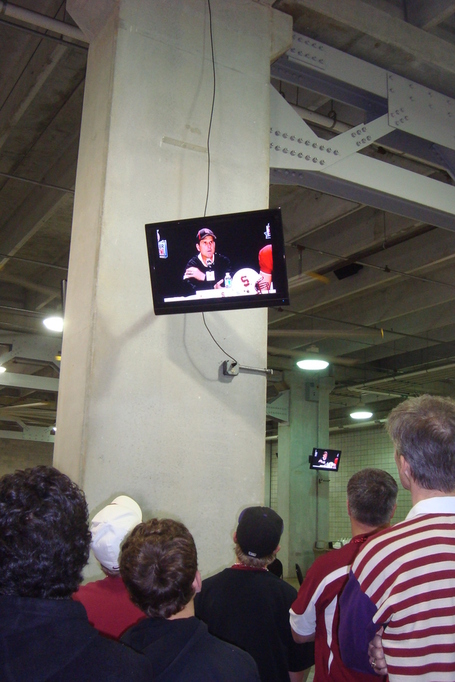 Worst Suspense: A group of Stanford fans watch the postgame press conference on a TV outside of Sun Life Stadium. Harbaugh and Luck refused to address their future plans

Best Seatmate: On the flight home, I sat next to a former Western Kentucky football player who played for Jack Harbaugh. He remembered Jack as an excitable guy.